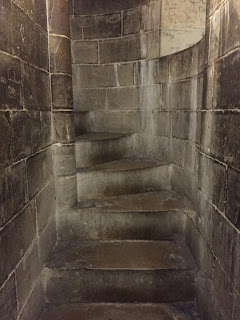 One of the most important lessons I have ever learned about God, I learned sitting in the waiting room at my optometrist’s office. I was sitting there, probably with a book, waiting my turn to be seen. Across from me in the corner of the waiting room were sitting two people. One was a young teen, maybe middle-school aged, and it was clear that he was a special needs child. There was impairment in the way he thought and processed information, and the man sitting next to him appeared to be his grandfather. If you have ever worked with special needs children, you know that many of them have something that they are very good at. Something that they retreat into that gives them comfort.  Life can be pretty frightening and difficult to take for children with cognitive challenges, so they retreat into that special activity or place and it calms them down. That’s the place they go to restore order and to find peace of mind.
You could tell right away what this young man’s area of expertise was. He had brought it with him. He had a thick, well-used Sudoku book that he was working through. From the look of it, he had already completed tons of the number puzzles. That was what he was good at, that was what he knew. He completed puzzle after puzzle with eagerness and enjoyment. As I continued to watch something happened. The young man’s peaceful face creased. His eyes sharpened their focus. His breathing became more rapid. The puzzle he had just turned to wasn’t like the others. The thing that had given him comfort just a few minutes ago was now causing him pain. At this point, his grandfather noticed that something wasn’t right. He glanced from the puzzle book to his grandson’s face, then he stepped in. In a calm tone and at a deliberate pace he began to speak. “I know this one’s tough, but you can do it. It looks different, but you’ve solved problems like this before.” Then he patiently helped his grandson work through what had seemed impossible just seconds before. The young man caught his breath and confidence returned to his eyes. He had faced a challenge and with the help of his grandfather, he was better off for it. He had let his grandfather speak into his fears of incompetence and inadequacy.  The older man didn’t solve the problem for him, which would have been quicker. He simply came alongside the boy he loved, until things made sense again.
That’s like the God I know.
I’ve had times in my life and maybe you have as well when everything that I thought was safe and good was stripped away. Everything I thought I knew was flipped on its head.  The places and people that used to give us comfort now brought pain. It’s in those moments, when things seem irreparably broken, that God can step in. We must be willing to allow our fears of inadequacy and incompetence to be exposed, so that they can be calmed. God calmly reminds us that we can handle this. He wouldn’t allow us to face the challenge if we couldn’t. Then step by step and moment by moment, God patiently moves us forward. After a few days, months, or maybe even years, we realize that we’ve overcome a challenge that we felt was insurmountable, and we are better for it. God wants to share this life with you.
Let Him.
Comment0 | Share | Tweet | Share | +1 | print | email
Category: 2010-2015 Archives