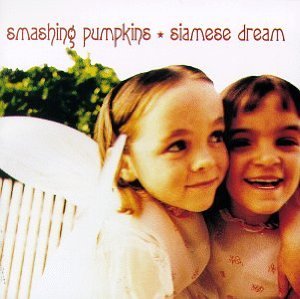 My march through 20 albums in 20 weeks continues with an album from my college days. It would be crazy, however, for me to write a review on this album when I know an authority on all things Smashing Pumpkins. So, I’ve invited the expert himself, Neil McLamb to weigh in on Siamese Dream by The Smashing Pumpkins. Also, if you are not reading his blog, you should start right now! You can find Neil’s blog here.

I am honored to be guest-writing on this blog. To top off a great invitation, Michael asked me to write a review of one of my favorite albums. The band who released this album is also my favorite band: The Smashing Pumpkins. Siamese Dream, released in 1993, was the bands’ second album. They were hugely influential during the “alternative rock era”, and this album in particular was the first to have such a heavy influence.
What They Think
Siamese Dream debuted in the Billboard top ten. It sold over six million copies. A total of four singles were released. Coming from an album with 13 songs (14 if you bought the version released in Japan), four singles is an amazing testament to the quality of music Billy Corgan, James Iha, D’arcy Wretzky, and Jimmy Chamberlin were able to create. The album has been considered not only one of the best albums of the 90’s, but one of the best of all time according to Rolling Stone magazine. Rumors abound that Corgan was difficult to work with due to his demand for perfection. Despite relationship issues he may have caused in the process with his fellow band members, his drive to produce the best material obviously paid off.
What I Think
The opening track begins with an incredible introduction: Chamberlin on drums. Few people can play drums like this guy, and this song allowed him to flaunt that ability. What follows his intro is the rest of one of the most popular songs ever produced by the band: Cherub Rock. It features the “wall of sound” that became synonymous with much of the Pumpkins’ music. This “wall of sound” is beautifully unique and is somehow more soothing than one would ever think a mixture of loud guitar fuzz and distortion could ever be. More subtle tracks are present on the album, like Disarm, Spaceboy, and Luna. No matter what instrumental backing, the quality and depth of the lyrics are consistent. Corgan has a knack for writing good material, and he intertwined his lyrics (along with a little help from Iha) perfectly with the music they produced for this album.
Favorite Lyric
Wrapped my hurt in you
And took my shelter in that pain
The opiate of blame
Is your broken heart, your heart

(from song Soma)
Where It Fits
This is honestly an album I cannot get enough of. I love the shorter songs as well as the longer, more “epic”, tracks like Soma that seem to build momentum until you reach the soft, mellow ending that transitions you to the next song. Each time I listen to Siamese Dream, it seems as though I can pick up on new intricacies in the music I never noticed before. I’m a bit old-fashioned, so despite the fact that each track stands great on its own, I highly recommend experiencing this album as a whole, from track one to the end.
Comment0 | Share | Tweet | Share | +1 | print | email
Category: 2010-2015 Archives